Late canceling a member from a class. Late Cancel, how to not return credits, not return class pass, cancellation policy

Written by Julianne
Updated over a week ago

In StudioBookings the option exists to enable the Late Cancel feature so you can charge a member for either canceling a class within your restricted cancelation period or allowing them to cancel a booked class themselves if the cancelation occurs in the restricted cancelation period they do not get their credits returned.  This allows a person to remove themselves from a class but not have their credits returned.  This also opens up a spot for someone else who may be on the waiting list for the class.

If you wish to use this setting, you will need to enable it in Settings below since it's off by default -

After you have enabled the setting, the system will then use your selected restriction period to enforce the Late Cancel option.

In the example above, where this studio has the cancel cutoff set to 2 hours, this means that if a member has a class booked and wishes to cancel the booked class within the 2 hours before the class starts they will be allowed to cancel but the system will advised them they will not have their credits returned. They can choose to continue to cancel or stay in the class.

Also, If a member does not show up for an appointment or a class or calls to cancel during your restricted period or after the cancellation restricted window, you can late cancel the booking and the system will automatically not refund the credit that was used to book the class.

What about monthly members or members with unlimited credits?

So this is the million dollar question, right?  So here is what we recommend.  Note, this is optional and based on your business policies.

Optimally you would want to charge these members that are unlimited credit or have recurring billed contracts a fee to Late Cancel. If you'd like to charge a late cancellation fee, you should create a Package Category Called 'Late Cancel' and then add a class pass called 'Late Cancel'.  After one of these members late cancel, You can go to the member's profile and bill them (add this Late Cancel) for this package every time they Late Cancel a session or class booking. So adding the Late Cancel pass is basically the same as charging their card for a pass. So if the cost for a class is $15 then make the Late Cancel pass $15 and charge the member this every time they late cancel.  Again, this is optional since some studios prefer to not charge monthly members or unlimited credits members a fee for late cancelling.

In any case, now a member can remove themselves from a class late and have the spot open up for someone else.

You will also have a Late Cancel report page to track and see all late cancels.

You can see all late cancels and run reports on the Late Cancel Report page. 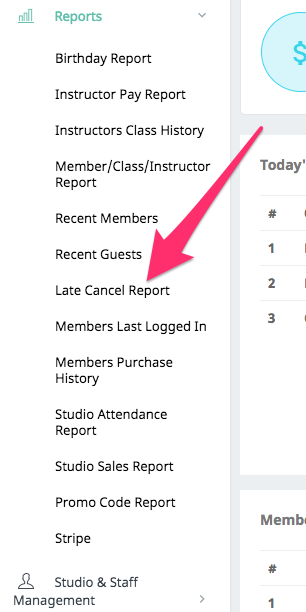 This report page allows you to view and see classes, class dates, members that late cancel.

Did this answer your question?